Department of Posts has the largest postal network in the world. It provides postal facilities within reach of every citizen in the country through its vast network at affordable prices. During the long journey from 1857 onward, India Post network has expanded from 23,344 post offices to 1,55,035 post offices as on 31.3.2008. Of these 1,39,173 Post Offices are in rural areas and 15,862 Post Offices in urban areas with an average post office serving 7,174 people and covering an area of approximately 21.2 sq. kms. Some of the important significant events of the Department, particularly focused at Aam Aadmi are as under:-

Enrolling the citizen for ‘Aadhar’ and dispatching the ‘Aadhar’ letters

The Department of Posts has initiated Mail Network Optimization Project to improve the quality of mail processing, transmission and delivery. The project seeks to optimize the existing mail network of Department of Posts with a view to streamline core mail operations. It also seeks to bring in greater standardization and improvement in the operational processes relating to mail processing, transmission and delivery and proposes to introduce a more effective Performance Management Mechanism for mail operations.

Setting up of Automated Mail Processing Centre’s - The Department has undertaken a project to set up Automated Mail Processing Centers (AMPCs) in six major cities with a view to automate mail sorting.The letter sorting machines would be able to sort approximately 35000 articles per hour whereas the Mixed Mail Sorter would sort approximately 16000 articles per hour.
The Mixed Mail sorting machines would help in faster processing of large size letters flats and packets/ parcels through the use of Optical Character Recognition (OCR) technology.
Automation in mail processing would also help the department in modernization of mail network, consolidation of sorting activities and expedite mail sorting and delivery in these cities.

Creation of National Address Data Base Management System - Under this project, the Department has undertaken and initiative to put in place a national address database management system with an objective to effectively manage the address database of public/ customers, update the addresses online, and help the customers in locating correct addresses and PIN codes. The project has been completed in to two metro cities where address data up to street level has been collected and street directory prepared.

Mechanization of delivery processes - The Department has also taken steps to mechanize mail delivery in phased manner. In order to ensure better monitoring of vehicles used for mail delivery, vehicles are being equipped with the Global Positioning System (GPS) device.

In this year more than 10,000 post offices are being monitored online.
The Department initiated Project Arrow in April, 2008. The project envisages up gradation of Post Offices in urban and rural areas both in terms of upgrading and enhancing the quality of service. The Prime Minister’s Award for excellence in Public Administration was received for Project Arrow-Transforming India Post-2008.

E-Post office- E-Post office Portal was also commissioned during the current year for e-Commerce activity of the Department of Posts which provides for ‘on time sale of philatelic material.’

E-VPP (Electronic Value Payable Parcels) - E-VPP is a service made available in 1,100 post offices; herein the value of payable panel is updated and sent to the sender online by recipient, avoiding the time lag to enable him to make payment through e-payment system of the department.

Contributing to the financial inclusion of the rural people:

Wage disbursal under Mahatma Gandhi National Employment Guarantee Act (MGNREGA)- Extensive rural postal network of the country is actively engaged in disbursal of wages of MGNREGA with high levels of efficiency. During the year 2011 the Post Offices disbursed about Rs. 6,000 crore by September, 2011 through about 5.27 crore savings accounts of MGNREGA workers standing in the Post Offices. Thus, the Department of Posts significantly contributed towards the success of this unique social security arrangement of unprecedented scale.

Financial Inclusion of Below Poverty Line (BPL) Household- Department of Posts leveraged its network and outreach to financially include BPL households by targeting them for opening their savings accounts in the Post Offices and thus providing them with access to savings services. During the year 2011 more than 84.77 lakh households were financially included through this initiative by October, 2011.

Collection of Data for Computing Rural Consumer Price Indices-MOS&PI (Ministry of Statistics and Programme Implementation)approached Department of Posts for collection of relevant data from rural areas for the MOS&PI. This would directly help policymaking for rural economy on various important issues. MoU was signed between MOS&PI and Department Posts to collect data on the prices being paid by the consumers in rural areas for selected consumer goods. Due to engagement of Department of Posts it was possible for the Ministry to bring out Rural Consumer Price Index and All India Consumer Price Index in February 2011, for the first time. Since then the Consumer Price Index is being regularly computed and issued by MOS&PI in each month.
Data for Rural CPI is collected for 1181 villages across the country every month. The Branch Post Masters (BPM) concerned ct prices of 185 to 292 commodities from the local market on the weeks fixed for each village.
Other significant initiatives

RGI Logistic Project – Distribution of census materials through Logistics Post was a massive project and it is managed under a Project model. With a vast network of post offices across the country, India Post could arrange for the distribution of the materials in an effective manner. This helped Registrar General of India(RGI) to undertake mammoth task of reaching every citizen of India and conduct the census remuneration work successfully. Distribution project of the census consignments was handled in two phases.
In order to facilitate the operations, which started in last week of December 2010 and Logistics Post booking counters were established in all the printing presses and consignments were transmitted through multimodal transport system in order to effect the timely, safe and secure delivery of the census consignments.
During the phase 2 operations of the project, 9967 MT of census materials was distributed by India Post to nearly 12,000 locations across the country including Reverse Logistics services for collection and distribution of the census materials from the Census Offices in the Talukas/ Municipalities etc. to Directorate of Census Operations in each State as well as Data Scanning Centers.
A web page has also been developed in order to provide real time tracking of the census consignments and to monitor the progress of the project.

Flat Rate Parcel Service (Domestic) - With the Indian economy growing at a fast pace, the express parcel industry has been growing consistently. As a part of business strategy and with a view to restructure its parcel business, Department of Post launched Flat Rate Parcel (Domestic) Service during February 2011.
Flat Rate Parcel provides an added convenience to the customers by offering pre-paid boxes in different weight slab as per the requirement of customers. It is an air express service under the brand 'Parcel Post' and provides time bound delivery of parcels. These boxes available in three capacities viz. 1 Kg, 2.5 Kg and 5 Kg are specially designed to ensure safe and secure transmission and delivery of the consignments. Sold at identified Post Offices only these can be booked at all computerized Post Offices.
ePost - ePost, a hybrid mail service is presently available in 3998 Post offices. During the year 2011(upto Nov, 2011), 9.92 lakh of messages have been sent and Rs.81.07 lakh earned as e-post charges.

Passenger Reservation System(PRS) - In order to provide Railway Tickets through convenient locations, Railway Reservations Tickets of all classes are being sold at the Post office in association with Ministry of Railways (MOR). The service is presently available at 172 Post offices and network is being further extended. During the year 2011 (upto October, 2011), DoP earned Rs.2.04 Crores as commission by issuing 13.73 lakh tickets through Post Offices.

Round Table Conference - A Round Table Conference on “Partnering India Post: 2012 and Beyond” was organized by the Department of Posts at Hotel Ashok in July 2011. Key stakeholders from Banking/ Insurance/ Telecom/ FMCG/ IT/ e-Commerce/ Logistics/ Publications/ Financial Institutions/ Government Ministries & Departments/ Industry Associations/ Academic Sector participated in the Conference and engaged into discussions to give shape to the India Post 2012 Project and explore strategic tie-ups with India Post.


Customer Grievance Redressal Mechanism- The system of acceptance/receipt of complaints in the Department of Posts is readily accessible to the public. Each post office works as a receiving point for complaints. The Department has also introduced the facility for customers to register complaints online at its website www.indiapost.gov.in from the year 2001. The reach of upgraded interconnectedComputerised Customer Care software for grievance handling is being widened and it is expected to cover 10,459 Post Offices during the current financial year (2011-12).

India Post successfully hosted the meeting of the Board of Trustees (BOT) of the Quality of Service Fund of Universal Postal Union in July, 2011. The Board of Trustees comprising 9 elected members from different geographical regions of the world is responsible to oversee appropriate distribution and approval of projects that merit QSF funding. India Post is one of the nine elected members of the BOT.

Department of Post hosted a meeting of an Expert Group of postal administrations of SAARC countries in New Delhi on 15th and 16th of September, 2011 to discuss the Constitution and General Regulations of proposed South Asian Postal Union(SAPU). The meeting was convened successfully with the necessary quorum. Afghanistan, Bangladesh and Nepal could not attend the meeting. They however, expressed their strong support for creation of SAPU. A joint statement proposed by the Chairman was signed by the Expert Group requesting SAARC Chair to announce the formation of South Asian Postal Union. SAPU would promote cooperation among Postal Administrations and improve services in the region, development of common terminal charges and lower postage rates based on regional costing rather than the current system which is based on world averages, facilitate human resource development and sharing of best practices in postal sector.

The Cabinet approved the proposal to join the proposed SAPU comprising of SAARC member countries. The Cabinet also approved the setting up of an ad-hoc Secretariat for the SAPU at New Delhi which will be headed by an interim Secretary General from Department of Posts, Government of India. 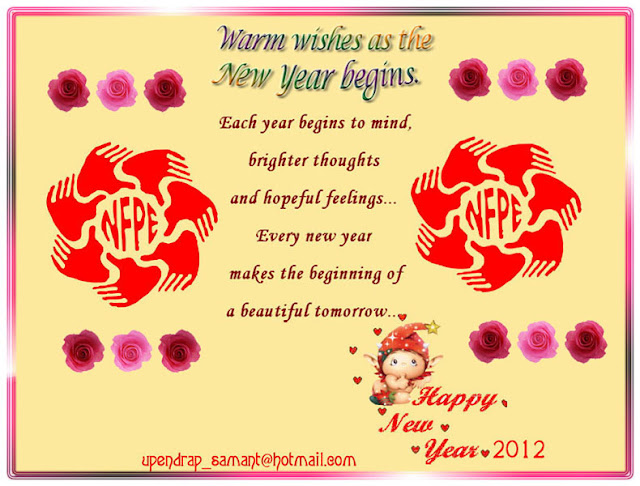 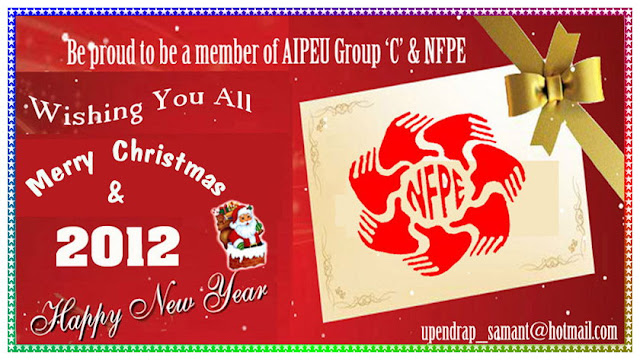 CLICK HERE TO VIEW SB ORDER NO. 32/2011 - CIRCULATION OF NOTIFICATIONS ISSUED BY MIN. OF FINANCE (DEA) NOTIFYING THE CHANGES IN RULES OF DIFFERENT SAVINGS SCHEMES EFFECTIVE FROM 1.12.2011.

CLICK HERE TO VIEW SB ORDER NO. 33/2011 - ISSUE OF CLARIFICATIONS REGARDING PREMATURE CLOSURE OF TD ACCOUNTS

CLICK HERE TO VIEW SB ORDER NO. 34/2011 - PROCEDURE FOR OPENING OF SAVINGS ACCOUNTS OF BELOW POVERTY LINE (BPL) HOUSEHOLDS.
Posted by nfpe pta at 9:53 AM No comments: